One man, his passion, and 100 years of Florida history

In 1903 a plumber by the name of George Turner, Sr. purchased the six acres that would become a world famous botanical attraction. Using an elaborate maze of clay tiles, he drained an ancient lake on the property, leaving a rich muck soil that was ideal for his favorite hobby – gardening. Neighbors so enjoyed strolling through Mr. Turner’s garden, that by the early 1920’s, he was charging a nickel for tours. Three generations of the Turner family continued the vision that created this unique tropical garden, with its flowing ponds. For many years, this was a top tourist attraction in Florida.

On a recent warm & sunny day, Niki and I visited SUNKEN GARDENS, which is St. Petersburg’s oldest living museum; this 100 year old garden is home to some of the oldest tropical plants in the region. We spent several hours following through meandering paths, lush with exotic plants from around the world. We found cascading waterfalls, beautiful demonstration gardens, more than 50,000 tropical plants and flowers, two flamingos, and numerous turtles and Koi. A quiet and tranquil place smack-dab in the middle of a busy city. 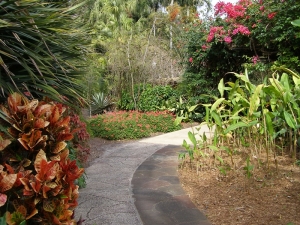 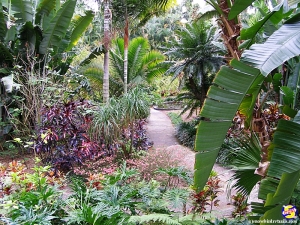 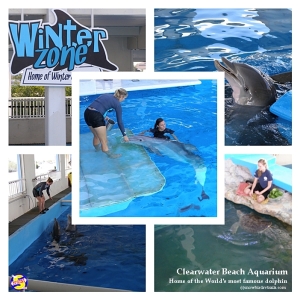 On a recent weekday we decided to visit “Winter, The World’s Most Famous Dolphin”. (Photos below) It was and is a two-part experience, first with a visit to “Winter’s Dolphin Tale Adventure” located in downtown Clearwater, Florida. This is all about the movie “Dolphin’s Tale”, with props, sets and background info about the movie and all the scientists went through and accomplished to create a working prosthetic tail for the dolphin. Not an easy task as a dolphin’s skin is very sensitive. The “museum” also has a large gift shop with everything “Winter”, a small snack shop, and even a “hurricane room” where a visitor can experience some of the wind effects of a hurricane.

Then we made the trip to the Clearwater Marine Aquarium located a short distance away in Clearwater Beach. The choice of transportation (included) was by “Jolly Trolley” or water taxi.

At the Aquarium we watched Winter with her handlers and other shows featuring dolphins, sea turtles, otters and other fish.

It proved to be a fun and interesting day that was also highlighted by lunch at Palm Pavilion directly on Clearwater Beach (not included).

“Winter’s Story
In December 2006, the CMA team was unknowingly about to encounter the most amazing animal – one that would catapult their mission of marine life rescue, rehabilitation and release into the public eye around the world. Winter is likely the most famous dolphin in the world. You may have seen her featured on the NBC Today Show, CNN, BBC, or hundreds of newspapers around the world.

Time to stop and smell the flowers, commune with the ducks, gators and the rest of Nature. A visit to any of Florida’s State, County, or City Parks offer a glimpse of the beauty and tranquility that makes Florida a Winter paradise.

When it’s 82* outside it’s a little too warm for the beach so we go picture taking. The Tampa Bay/Clearwater area covers two counties, Hillsborough and Pinellas, and both are rightfully proud of their many scenic and recreational parks. Many were built to control water run-off and then made multifunctional. All have winding paths through the moss laden oaks, benches & picnic tables, and abundant wildlife. “Disc Golf” is big down here with courses in many Parks. Tampa’s Hillsborough County now charges an entry fee of $2, but Clearwater’s Pinellas County offers free access to its Parks. Yesterday afternoon, Niki and I were able to visit 3 Parks in Pinellas County before closing time.